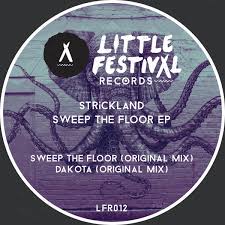 Making his return to Little Festival Records, this time in the form of a solo EP is the largely talented STRiCKLAND. His 'Sweep The Floor' EP comprises chunky borderline techno and organic deep tech rhythms, dark and intrinsic melodies and bags of personality. Since his remix on our label late last year we have watched with a keen eye as he has continued to release high-calibre productions, so we are delighted to now present a thumping 2 track solo EP from the man himself.

Opening the show is the title track 'Sweep The Floor', a chugging groover built on a foundation of robust drum work, shuffled percussion and a rumbling, tonal low-end bassline. Add into the mix some catchy, driving melodic elements and space-creating use of FX that really open out the track, giving it a broad and sinister character then you have yourself a powerful final product. One for taking it up a gear or two during peak time sets and sure to get people moving!

The second half of the duo 'Dakota' takes a lighter and more swayed approach, still carrying with it STRiCKLAND's insatiable melodies but taking on the role of an authentic Deep/Tech hip shaker. He continues the trend of solid drum patterns, loose percussion and engaging tones with his synth work. He also exhibits more masterful use of FX to open out the track giving it a vast soundscape full of emotive atmospherics. One for the later hours of the party, sufficiently meeting the requirement for 5 am primal minimalism in its most eyes closed, dance like nobody's watching form.